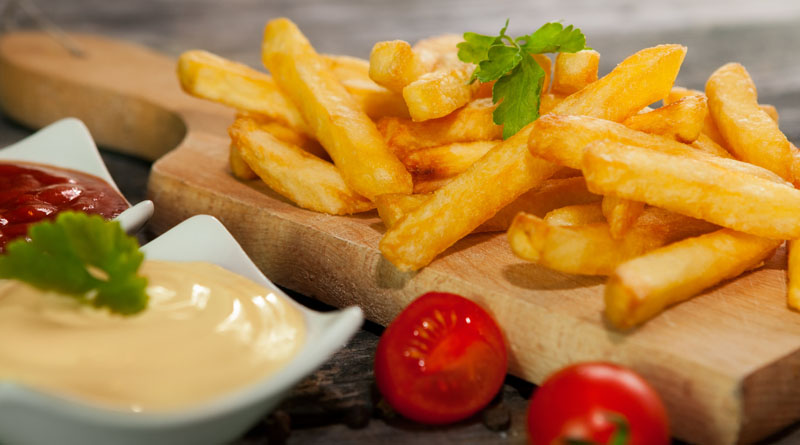 Fries are a pretty important part of many Americans’ Diets – not because we can’t do without them physically, but because we have become used to them, but are they Gluten Free? Common sense says that French Fries should be completely free of gluten: they are made of potatoes, after all, and potatoes are gluten free, right?

Fries are often dusted with flour to give them a crisper, more flavorsome outer skin when they are deep fried. Especially if they’re spicy or flavored fries, when the dusting is used to hold the spices there.

This is more common than we’d expect and it’s difficult to tell from looking at the fries, assuming you want to wait until your dinner’s in front of you to know if you can eat it safely! Often, the waiting staff won’t know either – in fact, the kitchen staff often won’t know: the fries will often show up to the kitchen in boxes of plastic bags and go into the freezer, and then straight to the fryer. The dusting was done off-site, wherever the fries were produced.

So how to tell if the French fries at a restaurant or diner are dusted or not? Well, some places will make their fries on site. If that’s what they do you can ask them to make sure they’re prepared in a gluten free way. Otherwise, you can ask but they’ll probably not know, or they’ll explain that they can’t absolutely guarantee that any product is gluten free…

So what’s left? Well, the only real option is to do your own research before you go out. Most chains will let you know what’s in what they sell, and some celiac sites and blogs will give lists of gluten-free companies or establishments.

McDonald’s fries and hash browns contain wheat derivatives, but tests by an independent company which were sensitive to 3 parts per million came back negative. The definition of ‘gluten free’ is usually taken as being 20 part per million. So McDonalds fries are probably safe. Most of what KFC and Burger King sell is not gluten-free, although of course that could be the same deal as McDonald’s fries.

The bottom line is if you’re eating out, look the place up and keep looking til you find a site or other source of information that gives a detailed answer: most companies will shy away from describing any of their products as ‘gluten free’ in case somebody suffers an unusual reaction, so you have to look at the details to get a sensible picture.

Are Chips And Salsa Healthy?

Vance’s INCREDIBLE 365-day Weight Loss Transformation will BLOW YOU AWAY!